This week I wanted to do something a bit different, so I made a log cabin cushion. I know what you are thinking (“What is different about that?!”), but this was no ordinary log cabin, this was a Manx Log Cabin, a unique technique that originates on the Isle of Man. 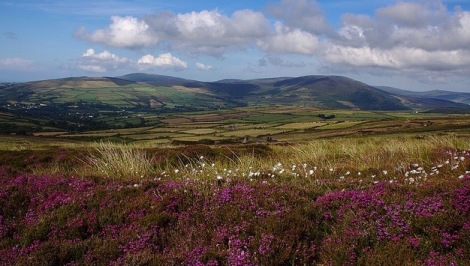 A view of the Isle of Man

Log cabin (one of my all-time favourite patterns) is one of the oldest known patchwork patterns. The oldest log cabin patchwork, discovered to date, is from England from 1650! Very old quilts are also known from elsewhere in the British Isles and from Sweden, pre-dating the pattern’s huge popularity in the United States from around the middle of the 19th century.

On the Isle of Man they have their own traditional way of constructing the pattern, which involves folding and overlapping the ‘logs’. Log cabin is traditionally known there as the ‘Roof Pattern’, perhaps because the overlapping logs resemble roof slates or shingles (although many of the Manx islanders lived in thatched cottages). The folding technique means that each log forms a narrow pleat as you construct the block.

The block is pieced on a fabric foundation that forms the back of the completed patchwork block (no batting is used in these quilts, as they are quite thick from the overlapping layers of logs; they aren’t quilted either). Traditionally the block size was the span of the sewer’s hand, with the fingers spread out (in my case, that would be 9″), plus a seam allowance.

In the late 18th and early 19th century fabric was in fairly short supply on the Isle of Man, and so old quilts are mainly constructed of repurposed clothing and other scraps of fabric. The strips weren’t cut with scissors (also rare) but either torn, or cut with a knife. The size of the central patch and the width of the logs was also determined by the maker’s hand. The central patch was a square with sides as long as the inside length of the middle finger, the width of the logs was the length of the inside of the thumb to the underside of the thumbnail, and the seam-allowance was the width of the little fingernail.

The patchwork was sewn in the evenings after the chores were done, in poor light: the folding technique conceals the stitches used to sew the logs, so was a good way of hiding any irregularities caused by the odd squint stitch or the slightly rough edges of the patches.

I decided to cheat a little with the width of the logs, and use left-over Jelly Roll strips, that are 2 1/2″ wide, a half inch wider than the length of the inside of my thumb to the base of my thumbnail, but the technique described here is correct!

I had a number of red and green strips, so I decided to make a green/red block. I decided on a maximum of six logs, which I calculated would be a bit more than 9″, but not enough to be a problem for the pleats (I think if you made a really big block, the length of the pleats would eventually be a problem, and prone to getting caught on things, probably that is why traditionally the span of your hand is the maximum size of the block).

The green and red strips for the block

You begin with the foundation, which needs to be folded in half and then in quarters diagonally, and pressed, which gives you diagonal guide-lines. Because I was going to use my log cabin as the centre of a cushion, I cut a large foundation piece: much bigger than the log cabin block itself was going to be. I used calico (muslin), as it was going to be hidden inside the cushion cover. If you were making the patchwork for a quilt, then the foundation is also your backing fabric (so is visible in the finished quilt). 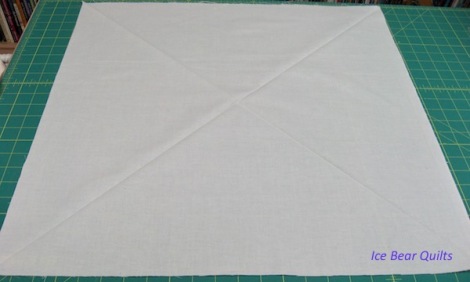 The central square in place

And then you cut and add your first log.

The first log is sewn in place using a standard 1/4″ seam allowance, just as you would with a standard log cabin on a foundation, but you could use an allowance up to 1/2″ if you wanted to.

Then the folding begins: you fold the log back upon itself, folding over 2/3rds of the remaining width: in this case I folded them back 1 1/2″ (2/3rds of the remaining 2 1/4″). Then press in place to set the fold. This means that the raw edge of the log extends some way beyond the original edge of the central patch, which stops where the red arrow is in the photo below. 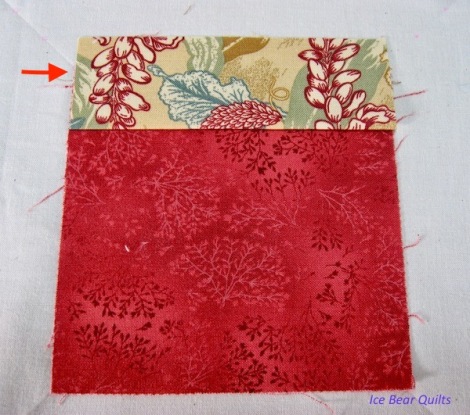 The log pressed back on itself to form the pleat

At this point you have made your first pleated log.

Lifting the edge of the pleat to show that it is there!

Then you add your second log, aligning it as usual with the edge of the central patch, and stitching it with a 1/4″ seam. Don’t worry that your first log is unsecured on its outer side: it will be caught down when you add the next round of logs.

It doesn’t matter if you go clockwise or anti-clockwise to add your logs, as long as you stick with your choice! The second log in turn gets folded back and pressed, and you continue on with the third and fourth logs. 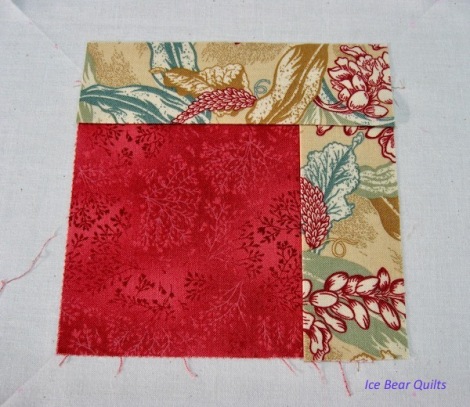 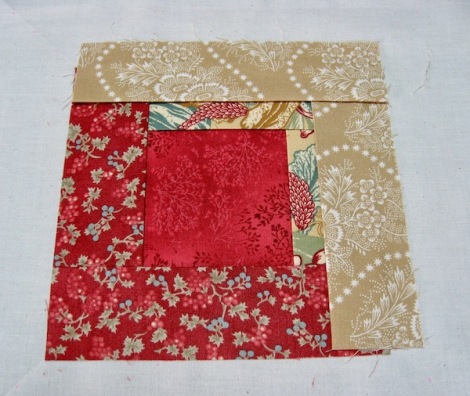 Half way through the second round of logs

Sometimes you see a folded log cabin technique were the logs are folded first, and then sewed down with one seam, but the true Manx method is this one. It means you can’t see the seam-lines, even if you look inside the pleats.

So you keep on sewing rounds of logs, folding them back by 2/3rds for each round. The folds in the foundation serve as guidence that the logs are staying on track for a square block!

The amount of the log that shows in the finished patchwork is actually slightly shallower than the depth of the pleat. This means that there are always (except round the centre square) at least 5 layers of fabric. That is why Manx Log Cabin quilts are warm, even though there is no batting.

I decided six rounds of logs was enough: that gave me an 10 1/2″finished block. I sewed the outer round of logs down 1/8″ from the edge to hold the logs in place.

If one was making a quilt, then you would leave the outside edge of the outer logs loose, and when you came to join the blocks, would sew the outer logs (not the foundation) of adjacent blocks to each other, with a 1/4″ inch seam and then on the back overlap the edges of the foundations, fold one edge over, to neaten the edge, and slipstitch them together. This means that the outer logs are always a little wider than the inner logs, something that Manx quilters exploit in their settings.

I wanted to make a 20″ cushion cover, so I needed to add 4 3/4″ finished width to each side of the log cabin block. I decide to add wide strips (without the pleat!) of shot cotton from Oakshott, in green and red, following the pattern of the log cabin logs. Giant logs, as it were. The shot fabrics give the cushion a bit of extra warmth and presence, although they don’t photograph easily!

The finished log cabin block was a bit weightier than I had anticipated: the next time I make one of these I will use a sturdier foundation (like flannel or wool or perhaps even duck cloth if its for a cushion), or a calico (muslin) with an added stabiliser. To be certain that the cushion front wouldn’t eventually sag from the weight of the log cabin, I added iron-on stabiliser to the back of the foundation before constructing the cover. 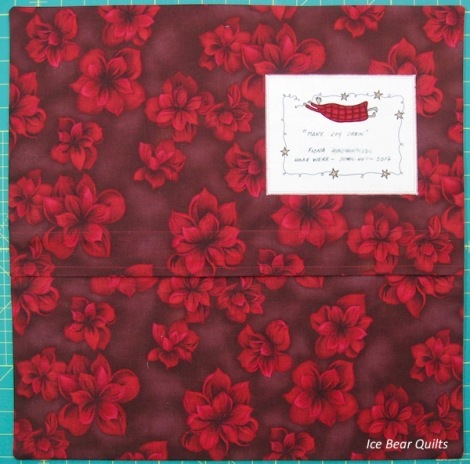 The back of the cushion

I made a double-layer backing with a label and a velcro fastening. I used a deep red backing fabric for the back of the cover. I have a supply of backing-width fabrics in basic colours in my stash for this sort of thing. I sewed the backing to the cushion front, finished the edge with my overlocker and turned the cushion cover right side out.

The front of the cushion

Then I added a pillow form.

A close up of the log cabin centre shows the subtle play of shadow and texture caused by the pleated logs.

A close up showing how the pleats sit

I really enjoyed making this Manx Log Cabin, and I’ll certainly make something else using this technique at some point. I’ve added this cushion to the day-bed in my studio.

If anyone tries this technique, then I’d love to hear from you!